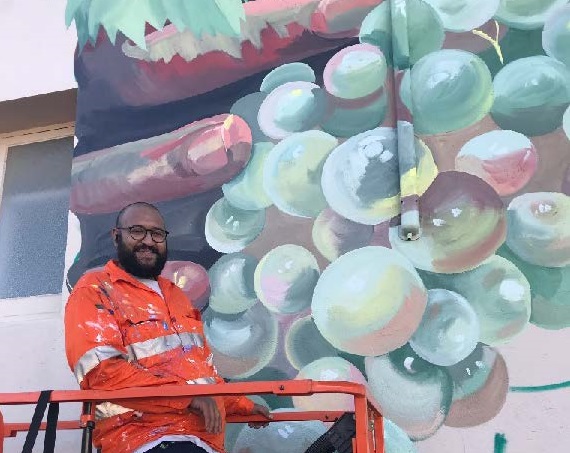 Mural artist Jack Fran is painting a mural to span the length and width of the southern wall of the former Millers building on the corner of Gleeson Street and Main North Road, Clare.

Using 100 litres of exterior house paint, Adelaide mural artist Jack Fran has been creating a visually stunning mural on a giant blank canvas in the centre of Clare.

Painting began on the southern wall of the old Millers building on the corner of Gleeson Street and Main North Road the week before the Easter long-weekend and will be completed by Friday, April 17.

The mural is part of Clare’s CBD activation and the Clare and Gilbert Valleys Council’s staged approach to the project, which has included construction of a verandah alongside the Clare Town Hall, footpath upgrades, new bins, bike racks and street seating.

Objectives for the mural included that it represent Clare and the broader Clare Valley with a reference to wine, that it would be colourful and respected its place in the centre of the Clare main street as well as creating a strong feeling of identity, public pride and ownership.

Jack Fran is an established mural artist who is passionate about renewing rural and metropolitan places with vibrant and bold artwork. He has works in Bendigo, Renmark, Charlton and Murray Bridge as well as Adelaide.

The mural will show the torso and hands of a winemaker picking and cutting grapes for harvest.

Mr Fran said he had not visited the Clare Valley prior to being commissioned for the work, but has found the region stunning.

“I did a site visit a few months ago and I love it here, it’s beautiful. I was also very excited to work here as you don’t often find such large ‘canvases’ available,” he said.

Current distancing restrictions for COVID-19 haven’t proved to be an issue for completion of the work.

“My job is one of the most isolated you can have – I work alone and often am several feet off the ground, although I was surprised to see so many people around – I was expecting the streets to be completely empty.”

Mr Fran said the work would cover the entire length and height of the wall and he expected the paint to have a long life and keep its vibrancy over many years. 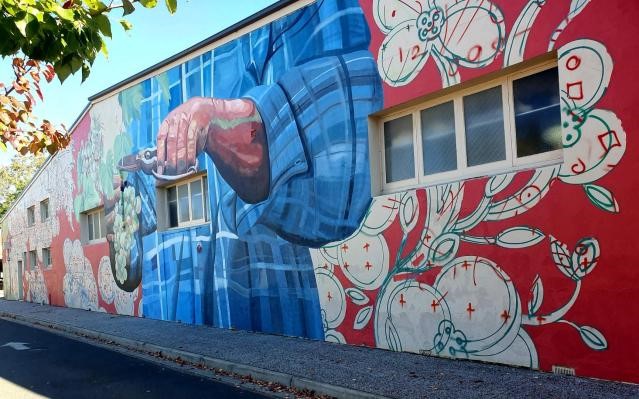